What seemed impossible yesterday, becomes feasible today and will appear tomorrow, an obviousness. I am thinking in particular of the multidisciplinary revolution of the Laser. Thanks to the technological progress of our time, this one makes dream in several domains (medical, aesthetic, industrial) by its uses among others in the ocular surgery, the epilation, the removal of the tattoos, the welding and the cutting. Most of its uses derive from this ability to increase the temperature very quickly and sometimes intensely on the same point of matter. This new modality became available today for the treatment of an insidious disease: onychomycosis. In this article, I want to share some results and photos that I myself have obtained using the FootLaser made by PinPointe (Cynosure). 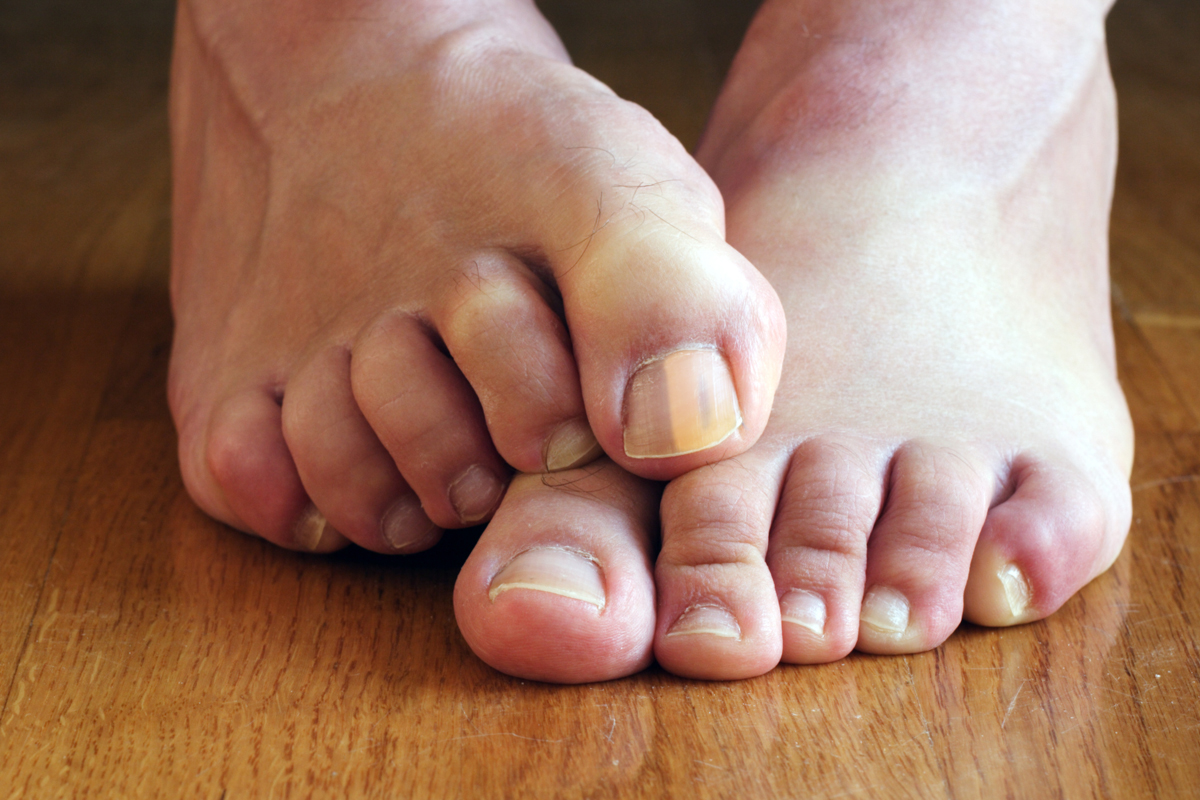 Several large-scale studies indicate that approximately 14-18% of the general population has a fungus nail infection, this incidence increases to 48% in people over 70 years of age. Trichophyton rubrum and Trichophyton mentagrophytes together constitute at least 80% of onychomycosis. The toenails are 7 times more often infected than those of the fingers because of the speed of growth of the tablet, about 3 times slower to the feet.

Homeopathic remedies in the form of natural components or essential oils such as bleach, tea tree oil, vinegar, Aloe Vera and mouthwash (“Listerine”) rarely work and are for the most part a waste of time and money. Pharmacological treatments are normally more effective for onychomycosis (oral terbinafine or Penlac 8% solution). The ciclopirox lacquer at 8% is effective in the treatment of mild to moderate onychomycosis. The results are mixed; after one year, the success time varies between 10% and 35%. Topical treatments (Loprox 1% cream or Lamisil cream) are not suitable because of their inability to diffuse through the nail barrier (where the fungus grows) and not to stay in contact with the application site. way long enough (immediately wiped).

What is laser treatment?

Since February 2011, the PinPointe Laser has been approved by Health Canada. It was approved in the United States by the Food and Drug Administration (FDA) in October 2010 after 5 years of research. Clinical studies show that 71.4% of treated patients achieved a marked improvement in the appearance of the nail beyond 12 months.

The PinPointe Laser emits invisible light energy inside and through the nail, as well as on the skin surface around the nail. This energy is then absorbed by the pigments of fungal organisms, causing a thermal effect that will damage and destroy the fungi. If all the organisms present are destroyed, the nail will normally grow back and regain its transparency and natural texture. For this reason, several sessions are necessary for a complete eradication.

The preparation of toenails before laser treatment is undoubtedly one of the success factors of the procedure. Laser energy typically penetrates tissue to a depth of about 3 to 4 mm. The nails must therefore be as thin as possible and reduced to a thickness of 1 mm to allow a sufficient amount of energy to effectively reach the subungueal tissue without being absorbed or diffused by the nail plate. This is when the podiatrist’s intervention occurs.

During treatment, a feeling of warmth or mild pain is often felt. The parameters are adjustable according to the sensitivity. No anesthesia is necessary. The procedure takes about 30 minutes for all affected nails. The improvement of the appearance of the nail is noted as soon as it regrows. Success is attributable to various factors, often environmental (closed shoes, humidity). In addition to the treatment of nails with Laser, we must also address the habits of the patient to avoid recurrence of the fungus. Preventive measures are therefore discussed. The patient must understand the procedure and have realistic expectations before starting treatment. As with all treatments to eliminate onychomycosis, several sessions are required.

In March 2013, I acquired this new technology given the high demand and need for this service among the aging population. So far, I have treated just over 100 patients. Here is a case study of one of my patients who has achieved complete healing.

This is a 54-year-old patient, very healthy, non-smoking, active and dynamic, who comes to the clinic, accompanied and referred by his wife, for the treatment of mycotic nails in the left foot; the hallux being more severely infected. This condition dates back several years and causes a constant and uncomfortable cosmetic discomfort during travel. No pain or sensitivity is associated.

As a chartered accountant in a large firm, the patient is always well dressed. His oversized shoes cause repeated microtrauma of the nail plate with onycholysis and seem to be the promoting factor. In addition, the humidity found in this environment may be another favorable vector for contamination (perspiration), because fungi grow faster with heat, moisture and dim light. Over the years, he noticed that his fingernails deteriorated with the following suggestive signs: yellowed, thickened and peeled nails. It was then that he decided to consult on May 7th. No treatment previously has been done. 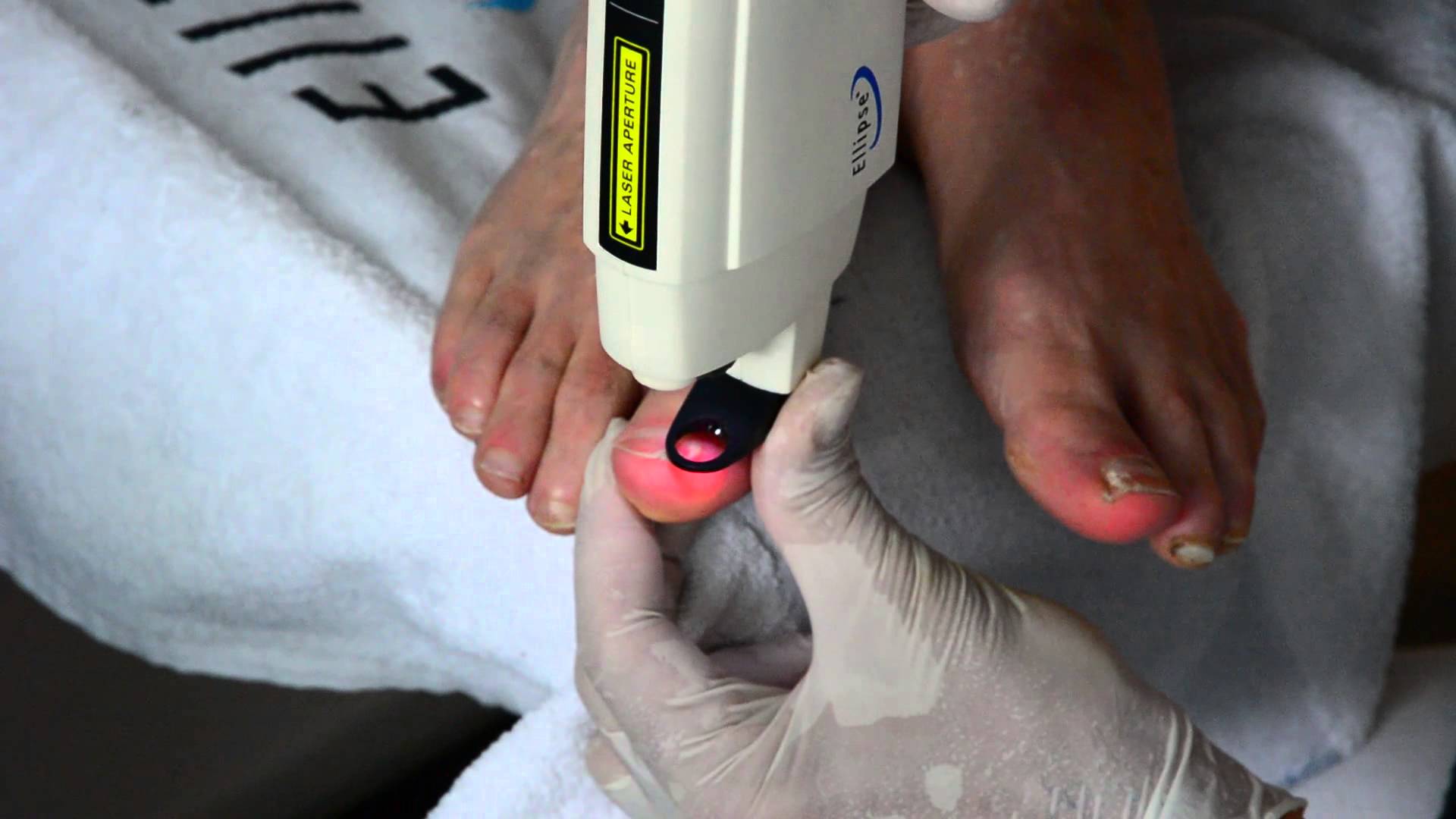 Following the anamnesis, her feet were examined and various conventional treatments were explained to her. The patient opted for the Laser solution because he did not want to be subject to side effects or possible drug interactions such as oral medication: Itraconazole (Sporanox), Terbinafine (Lamisil) or Fluconazole (Diflucan).

As the clinical features were highly suggestive of onychomycosis, no histopathological examination or sampling was done. I realized, over time, that there was often a negation of the mycological examination. By the way, clinically, there was a return to the normal of the treated nail. One third of patients with negative culture may have a false negative result after a new examination. Given this discrepancy, which creates an unwelcome confusion, culture and direct examination with KOH are not always part of the routine given their specificity.

The patient was informed that the duration of treatment varied from person to person. Factors such as trauma, lack of hygiene, hyperhidrosis, poor circulation, duration and severity of infection, age, and general health may influence the results. Regular follow-ups every 2 months were carried out and photos were taken at each session.

In conclusion, even though the laser technology is relatively recent, it is possible to notice that it has already proven itself on several hundred patients. It meets high quality standards and is increasingly integrated and adopted in our practice. A simple model, easy to use, safe, with little and often no side effects. All treatments have in common to be long because it is the healthy regrowth of the nail that shows the effectiveness. If I come back to my clinical case, my patient has learned that patience is a great virtue. As in accounting, efforts and patience are rewarded and proper follow-up is recommended to have beautiful nails. It takes a lot of time and money. Nowadays, as the accountants very well know, what does not require time and money?

Brining A Senior Home From The Hospital

What Do Orthopedic Doctors Do?

How to become a meditation and mindfulness trainer
Does Forskolin Really Work? Read Forskolin Reviews to Find out

Brining A Senior Home From The Hospital